From an early age, anything with an engine was my prime focus. My first earnings were made as a teenager performing simple mechanical tasks on narrow canal boats, ensuring they were ready for the next client during handover. My tasks were mainly checking oils and fluids, but getting my hands dirty with valve lash adjustment was a highlight! 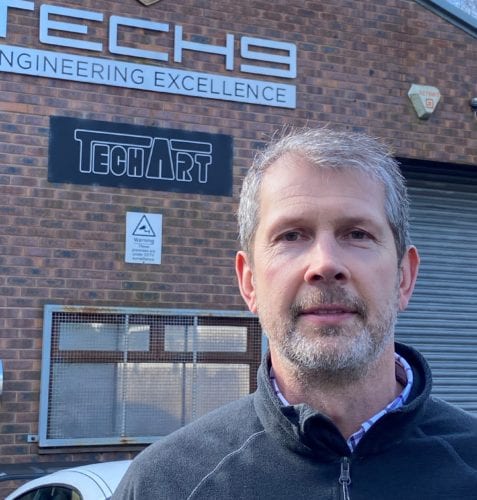 My earliest steps in the world of motorsport came after I saved up to buy my first Motocross bike. Although I raced for a few years, a couple of ‘lack of talent’ accidents helped me come to the conclusion that four wheels were probably safer than two! I bought a Mini, and prepared it myself, building the engine and gearbox, developing it into one of the fastest Class machines at the time. I’ve still got great memories of travelling the country, racing grass track ovals – real grass-roots stuff, and great for car control skills.

After saving up and trading various ‘cars of the day’, in 1990 I was fortunate to buy a 1976 widebody Porsche 911 2.7. It looked the part, Grand-Prix White, and it kindled my association with Porsche that continues to this day. I’m fortunate to have assembled a small collection over the years, I do move them around occasionally but rarely sell my personal cars. My current stable includes an early SWB 911, a couple of G-model 911s, a 1990 944 Turbo and a couple of 1988 928 SEs, plus an early Boxster.

I made the move into Porsche racing in the 1992 season and founded Tech 9 in 1993. It took a few years to learn the circuits and develop my car, but perseverance and hard work led to race wins in the Porsche production Championship over the 1994/1995 seasons. In the following years, I drove in all classes of GT racing, both nationwide and throughout Europe, enjoying notable Championship success, numerous race wins and podium finishes in British GT, TVR Tuscan’s, Tour Britannia and Rally of the Tests.

I’m not as prolific as I once was, but I still like to get involved in the odd Historic race or rally event. Whenever the opportunity arises you can be sure there will be no compromise in effort and hopefully some silverware at the finish!

Part of the Porsche Community

I’ve been a Porsche Club member since the early nineties and am always happy to see fellow club members pass through our workshop. I enjoy many of the community events here in the UK, and you’ll also find me at other Porsche events in Europe too. Highlights include the TechnoClassica in Essen, Germany, The Motor Show Geneva and Stuttgart Classic. Best of all, every day in the workshop I can share my passion for quality engineering, style and design with new clients and returning customers alike. Being chief road tester, I also get behind the wheel of some fantastic vehicles on a daily basis!

My time spent in the world of circuit and rally racing gave me valuable insight into the industry, it showed me how much meticulous planning and attention to detail is required to make these machines perform at their best. Success in racing sets you apart. To succeed, you need dedication and commitment to rise to the top. That same ethos is applied with every vehicle that enters our workshop. We want to offer the best service that we can, and ensure that our clients feel part of a special group of individuals here that all live and breathe the brand.

My team of experienced, qualified technicians understand this just as well as I do, which is why every vehicle that passes through the doors of Tech 9 is treated with the same exacting care and attention. There’s nothing better than the feeling of driving one of these cars, and our team at Tech 9 aim to perfect that experience.

For all media enquiries please get in touch via email.